Today,  in the brief respite from continuous rain and hail, members managed to get out and work on clearing the Sion Cemetery in Merthyr Tydfil.

Abandoned for well over a decade,  long before the chapel it belonged to eventually closed its doors,  it has become a choice destination for Twyn’s fly-tippers.

While our previous attempts at clear-ups managed to clear a vague path through the brambles,  we still had a lot of work ahead of us – mainly to start clearing both the graves, and the old path around the cemetery.

As we delved into the bushes and brambles,  more and more graves started to emerge – ones we had barely even managed to see the last two times we’ve been. 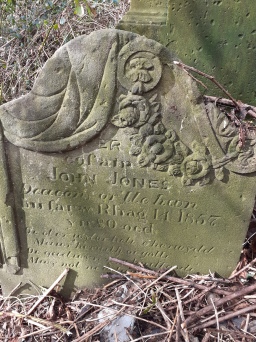 One of our most pressing challenges was to connect the upper tier of the cemetery with the bottom tier – with the former path covered in brambles and fallen tree branches.

Happily, by the end of the day the path had been cleared – with a make-shift path now cleared to all areas of the cemetery. In our three hours today, we had counted over eight bags of rubbish-  not including lager bottles, sleeping bags, even spare tires!

Ultimately though, there’s still a huge amount left to do – something we hope to do with some kind volunteers.

We’ll be announcing our next community clear-up within the next week or so,  and we hope you can come and see this amazing – albeit neglected hidden part of Merthyr for yourself.